How to Talk to Strangers (aka Networking)

I have spent a lot of time presenting about, writing about, and thinking about networking. As someone who’s uprooted their life several times (so far…I sense it will happen again in the future), I consider the ability to meet new people essential to my success and happiness. In the past I’ve even taken dares on walking up to random groups of people and chatting.

A few years ago, I presented internally in Automattic about how to talk to strangers (aka networking), and I wanted to share that presentation here and now.

Here are my tips about how to walk into a room full of people and talk to strangers:

This is either a physical or a verbal opening. When you go to an event, you’ll see these groups of people talking, in twos and threes, or larger, and to be honest, they’re not looking around for you. They’re not waiting for you to come up and talk to them. People usually won’t give you invitations to join them. So, you have to do it yourself.

If there’s a physical space, that’s even better, because you can just step into the group. I tend to do this, smile, and perhaps wait for them to notice you. You can either interrupt the conversation or not, and a lot of times I say “I’m just listening” if I don’t want to disturb the flow of conversation, and at some point you’ll get your opening.

Sometimes, you have to break in a little bit because people get used to talking to each other, and you can just say, “Hey, I just wanted to join and introduce myself.”

If it feels uncomfortable breaking into a group of six people, find two people talking to each other. Find one person who looks like you —hiding out in the corner perhaps, thinking “What the hell am I doing here?” and doesn’t know how to talk to anybody.

Maybe you start small with your conversation as well. Ask open-ended questions which allows people the chance to participate instead of shutting down conversation. Bad: “Have you been here before?” Yes/No. End of conversation.

This is one of my favorites: Be a host, not a guest. Even if you are a guest at any event, you can act the part of a host because you might have information about the people who are at the event, about the purpose of the event, or even about the location itself which you can present to the other person as useful. “Have you met so-and-so? I worked with him at C company on D project.” “Have you read X’s article about Y? I’m looking forward to hearing them talk about it tonight.” “Have you tried the Z here? It’s delicious.”

Use this information as a way to not be like everyone else who’s a guest, but to be someone who perhaps has a little more information and can be useful.

I can’t stress this point enough. Be yourself, but the interesting you. Everyone has something special or interesting about themselves (one of my colleagues called it the “nothings” about ourselves) that someone else can appreciate. Of course, in a perfect world, you have all this time to make organic friendships, and everything’s great, and slowly you unfold like a flower or an onion, and sharing all these layers of yourself with others…but in these situations, you have to give people some help, too (the phrase “Throw me a bone” from Austin Powers comes to mind).

You have to give people a little more information, a little more opening, for them to get a way to connect with you. So be yourself, but remember I as a stranger can’t know everything there is to know about you, even if I’m following you on Twitter. There are probably some things you can give me as openings to get to know you better.

So be yourself, but perhaps with a little more context. When you introduce yourself, you might add some context which piques the curiosity of the other person (I work in technology and I’ve published several ebooks), or perhaps is such a contrast to the event/situation you’re both in (I work in technology, but I’m also a cook and have secret dinner parties at my house) it will give the other person a great way to ask a follow-up question. 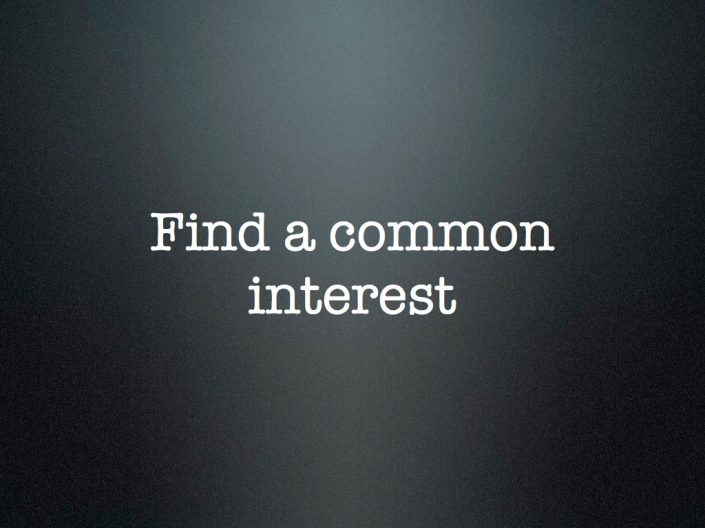 Most people do one of these things: reading, cooking, watching television, or spend time on the Internet. One way to get to know someone is to ask them about themselves, and usually people never get tired of that. One of the questions I like to ask is “What do you in your spare time?” which can blow open the doors to a lot of interesting hobbies, pastimes, and interests. You can ask someone “What’s one site you go to every day which isn’t a social media site?” “Where do you get your news?” “Whose recommendations mean an auto-buy for you?” “What’s the last book or article you read which stayed with you for a while?”

Sometimes I bring candy or chocolate with me to events or gatherings to have something to share and start a conversation with someone. Food is always a great ice breaker, and sometimes people are grateful that they didn’t have to make the first step in conversation.

This is not encouragement to make people your enemies for the sake of networking; rather it’s an opportunity to connect over something which can be bothering both of you, be it an article that was written, the terrible food at the event, or the wifi connectivity (and how common is this last one? Great opening to chat with someone). Sometimes something negative can be your opening, too.

This is probably the most counterintuitive thing I can tell people: when it comes to meeting other people, don’t take it personally. In the end, you probably have a short amount of time to interact with people. They don’t really get to see all of who you are, and if they’re not receptive to meeting you, it may be for a lot of different reasons like they could be having a bad day. Everyone has their own individual stories and the reasons behind their mood.

If for some reason you don’t connect with someone, unless they’re incredibly rude to you, just don’t take it personally. Maybe another time, another day, you’ll get a chance to connect with them and actually become more than just strangers.

As someone who spent a lot of her life wanting everyone to like her, when I started being ok with people not liking me, it’s when I really started to enjoy networking and meeting new people. When you don’t care if someone likes you after only a brief conversation, it’s quite freeing, and it takes away a lot of the fear about being judged.

Do you have any tips to share about meeting new people?